Localizing the Leap Manifesto in Peterborough

Localizing the Leap Manifesto in Peterborough

We’ve been stunned by how quickly Leap groups are popping up around Canada, building new coalitions among local movements to inject new energy into transformative campaigns. And it simply wouldn’t be happening without Peterborough, Ontario, which formed the first such group early last year. Their original local Leap—an expression of faith that a grand, sweeping manifesto could speak directly and creatively to their community’s needs and aspirations—has in many ways set the template for how this phenomenon is taking off.

Leap Peterborough has its roots in an organization called For Our Grandchildren (4RG), founded in Toronto to mobilize grandparents concerned about the climate crisis. When member and retired systems developer Guy Hanchet moved to the area in 2012, 4RG saw an opportunity to open a new chapter in Peterborough—which promptly found its niche within the city’s vibrant and storied activist community. “It’s really wonderful to have met so many people who are like-minded about civic duty, and about paying attention and doing the right thing,” says Guy.

When the Leap Manifesto launched during the 2015 election campaign, that community was grappling with a familiar dilemma. “Everybody was going around painfully deciding whether they should vote strategically, or vote for what they really believed in.” The manifesto suggested taking a longer view: make it through the exhausting election, help kick out Harper and the Conservatives—and then organize.

Their first reaction to the document, recalls Guy, was to challenge themselves: “What are we going to do about it?” So as soon as the election was over, 4RG helped convene a gathering “of about 15 or 20 local social justice groups—not just environmentalists, but all kinds of social justice groups.” Participants, including local chapters of the Transition Town movement, Basic Income Network, and Council of Canadians, hashed out a plan to call for a big public forum on the Leap Manifesto.

As it happened, many of these groups were sponsoring an upcoming screening of This Changes Everything at a local film festival—so they decided to pool their allotted speaking time and pitch the audience on the Leap forum, complete with a three-minute video presentation. “And we had a whole bunch of Leap brochures to give out on the way out, with little inserts inside that said, come to this meeting in two days. Let’s talk about how we can do something here in Peterborough to drive action towards the principles of the manifesto.” Guy adds: “And I love the principle, ‘A Canada Based on Caring for the Earth and One Another.’ It just makes me cry every time I read it. How can anybody not want that? How can anybody say ‘no, that’s not a good idea?’”

The pitch worked. “Two days later, we had 175 people show up to a church basement. The fire marshal would have probably shut it down if he’d known that.” That’s sort of like 20,000 people showing up to a community meeting in Toronto.

At the urging of Transition Town Peterborough in particular, the Leap organizers came prepared “to try and address issues that are local,” with ideas for working groups corresponding loosely to the manifesto’s 15 demands. What they did not anticipate was how smoothly people would organize themselves into those groups, determined to search out the best opportunities for action. 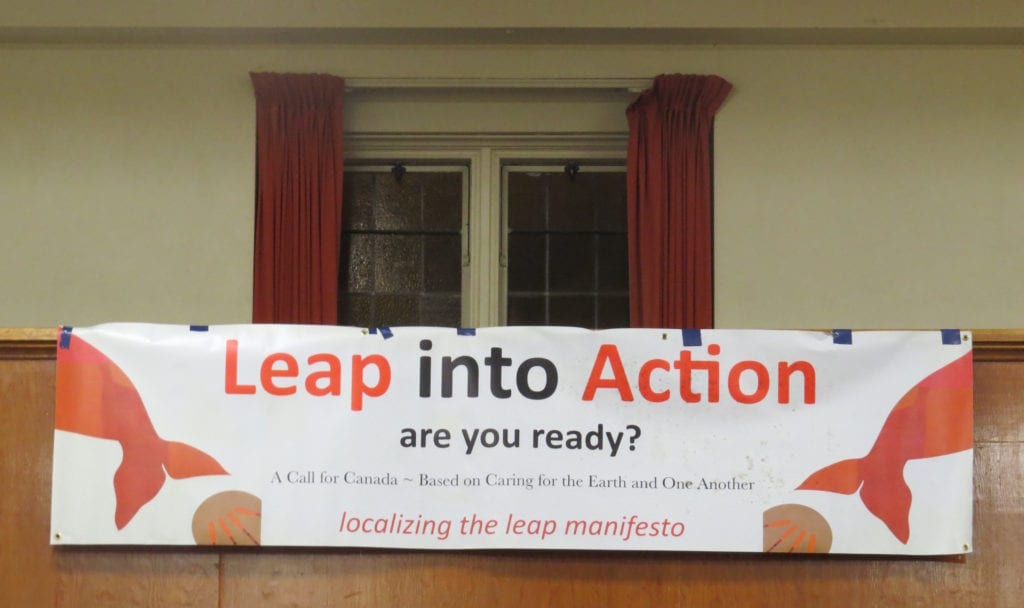 The process lent itself to a catchy tagline, “Localizing the Leap Manifesto,” which headlines the coalition’s website. Simply put, Guy says, the idea is to make the document “more tangible. When you act locally, there’s a chance that you can see your successes on the ground.” He cites the example of the Peterborough Pollinators—a Leap-affiliated group that has notched a few modest but inspiring victories lately, winning city money to build several new “pollinator gardens” (filled with native plants that attract bees).

“The reason for being local is because you can see the result. And even though that result isn’t big enough, it gets you maybe hooked on the idea, and maybe gets you motivated enough to go to the next level and start talking to provincial or federal politicians, and asking them to do what you think needs to be done.” 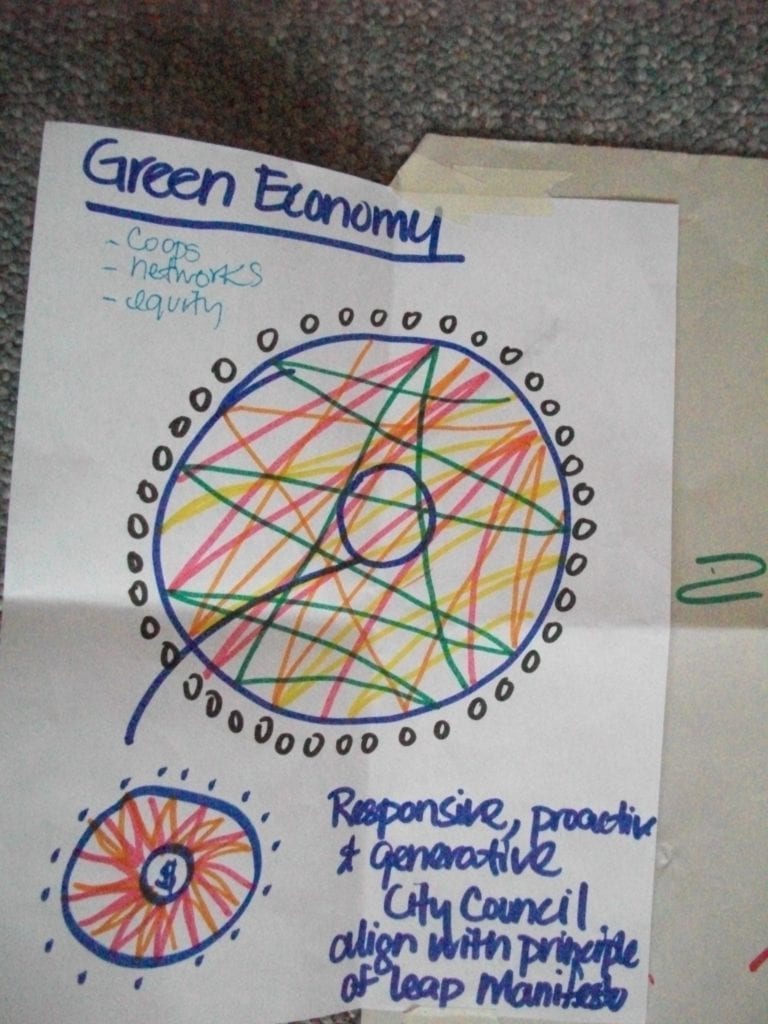 By localizing the Leap, Peterborians are also developing novel ways to work together across traditional silos. Coalition members are “totally committed to making climate connections,” explains Leap organizing committee member Linda Slavin, a veteran activist with a background in education and sustainability. Groups with well-established agendas—like the local Council of Canadians chapter—have felt empowered to say, “we’re going to work on climate change through our local issues, such as water,” she says. “That’s kind of a new thing for Peterborough, and it’s really quite exciting.”

As Leap Peterborough ramped up, “Corporate Trade and Divestment” emerged as one of the working groups most inclined to rabble-rousing. Participants knew that the city could do little to stop international deals like the Trans-Pacific Partnership. Buoyed by that awareness, rather than discouraged, the group found a way to go local while staying bold: they would campaign to prevent the municipally-owned utility, Peterborough Distribution Incorporated (PDI), from being sold to Hydro One. Keeping PDI in local, public hands, they reasoned, would make it far easier to work together on a green transition that would lift up the community.

The Save PDI Coalition, as it became known, struck a chord—rallying many of the 93% of residents opposed to privatization. “We never know how a working group is going to take the issue and move with it,” reflects Linda. “That constantly opens our eyes.”

In the end, the effort came one council vote short of getting the city to block the deal. It was a tough setback—but Linda and Guy see a number of positive legacies. One, of course, was learning “so much more about the distribution of electricity than I ever thought I needed to know,” says Guy. But Save PDI was a powerful education in another sense: “We established relationships with unions that we probably never would have any other way,” since they were among among the biggest defenders of the public utility.

Crucially, the campaign also got Leap Peterborough thinking far more seriously about the need to build a municipal politics movement. “The lesson is: elect decent people. So we are exploring that,” says Linda, who herself has run for local and federal office several times with the NDP. (And should they decide to organize a slate of Leap candidates for city council, they can now look to Thunder Bay for guidance.)

While some of the working groups are more active than others, Leap Peterborough has already kicked off a remarkable array of projects that anyone can join. (The workshops have built a practice of sharing their notes on Leap Peterborough’s website.) Just to name a few examples, Peterborough Leapers are working to: launch a pilot project for retrofitting houses; build support for local renewable energy by looking to similarly-sized Karlstad, Sweden, which has much in common with Peterborough and an advanced transition; and to pressure the city to spend more money on implementing its official climate action plan. The transportation working group is pushing for more bike paths, and has also joined with other organizations fighting to stop an extensive, beloved walking trail from being turned into a parkway. They’ve succeeded in delaying the project, with the province now demanding a full environmental assessment. 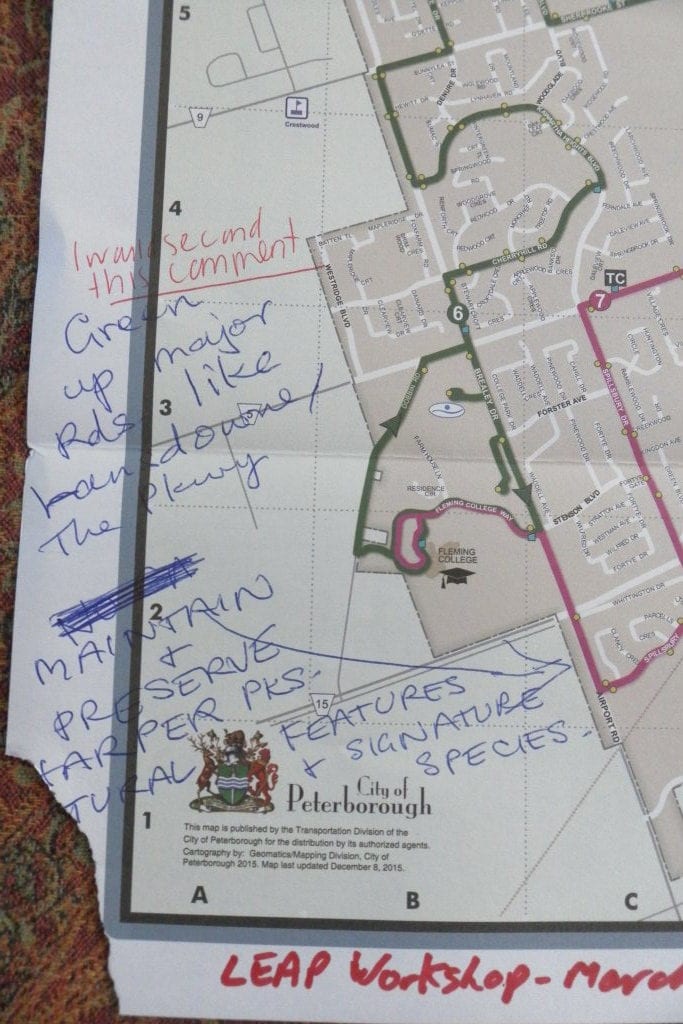 Meanwhile, an allied group called Reimagine Peterborough is aiming to shape the city’s legally-binding Official Plan, now being overhauled for the first time in decades. At a Leap event in March, Reimagine Peterborough invited everyone to dream about the city they want to see, with brainstorming under six themes: How We Live (“What do you want to find in easy reach of your neighbourhood in 20 years?”); How We Green; How We Grow (“How should the vibrant spaces we want be developed over the next 20 years?”); How We Move; How We Prosper; and How We Choose (“How would you like to see the city engage citizens in making changes to our neighbourhoods?”).

There’s little doubt that the city is taking notice. In fact, on June 6 it presented Leap Peterborough with a much-deserved Civic Award for “Environmental Stewardship/Sustainability.”

But the coalition’s ambitions go far beyond making Peterborough a green leader. And with such a wide-ranging agenda, it’s no surprise that keeping up energy and momentum has been a challenge. Leap organizers are finding that it helps to experiment with the format of their regular meetings, trying out different mixes of expert presentations, artistic performances, and time for the ongoing workshops. Recent events have tackled everything from proportional representation, in light of Justin Trudeau’s broken promise to pursue electoral reform, to exploring our grief about the climate crisis. 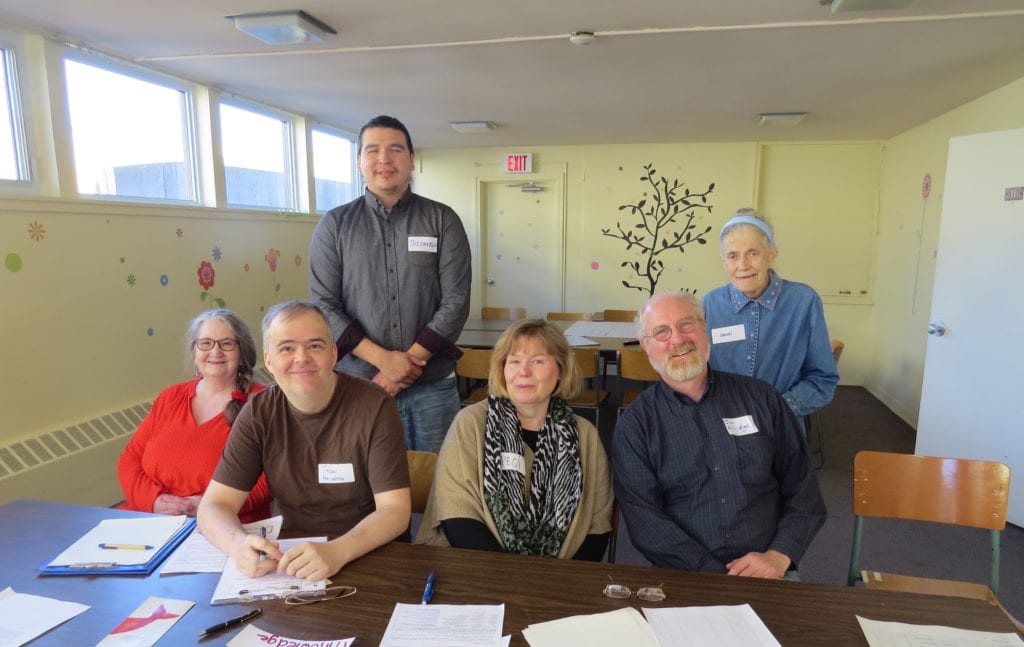 Another key lesson: you don’t have to do everything. Early on, Linda says, the coalition resolved to avoid duplicating efforts where local organizing on a given Leap demand was already strong. “We don’t try to be all things to all people, but we do try to fit into what’s happening and push it further.”

All of the work remains grounded in the simple, infectious idea behind “Localizing the Leap Manifesto.” The point, muses Guy, is ultimately to build power—“to get more people involved, to establish more connections, and to have us all support each other.”