The Leap is about going big — fighting for deep, integrated solutions to match the scale of the crises we face. To go big, there’s no getting around the fact that we need our national governments to deliver, and that we’ll have to raise hell to make them do it.

But that doesn’t mean they hold the keys to systemic change. Our communities do. And local communities around the world have been stepping up to supply the ambition and imagination that our political class has so spectacularly failed to muster. It’s never been clearer that The Leap starts with trailblazing victories won neighborhood by neighborhood, city by city.

That’s why we’re seeing Leap groups take root in cities across Canada, repurposing the manifesto to thread their struggles into a powerful new story and shake up local politics. In Peterborough, Ontario, working groups based loosely on the manifesto’s 15 demands are searching out the best opportunities for action, and already launched a coalition-building campaign to stop their locally-owned utility from being privatized. In Thunder Bay, Ontario, community members unveiled their own, re-written version of the manifesto—covering everything from ending homelessness and welcoming migrants, to reclaiming the city’s abandoned public spaces, to expanding local food and green manufacturing. Leap Thunder Bay has a bold plan for how to enact the platform: running a slate of Leap candidates for City Council in the 2018 election. 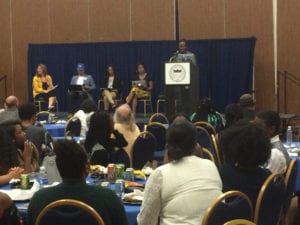 In the United States, meanwhile, three students from Historically Black Colleges and Universities (HBCUs) in the Gulf South region have used the Leap Manifesto as a jumping-off point to craft their own vision of what environmental and social justice looks like — and what it means to put frontline communities front and center as we build a better world. Among many other ideas, their “Just US Manifesto” argues that it should not cost more for those communities to live, get around, and eat sustainably. And it boldly calls for “political/financial reparations to show [society’s] overlooked and under-resourced communities that their voices have been heard, and they have not been forgotten.”

In your community, now is the time to take The Leap—and run with it.