The idea of a universal basic income has lit up policy imaginations around the world — and across the political spectrum. For free-market economists and Silicon Valley libertarians, it’s a tool to take away what’s left of our social safety nets. 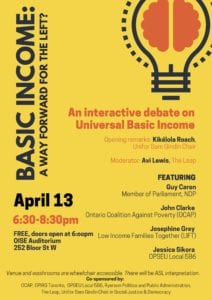 At The Leap, we see liberatory potential in the idea. We also acknowledge that a great deal of work remains to be done to define and rally people around a truly radical universal basic income. If it were part of a project to reinvigorate and strengthen public services, rather than an excuse to further decimate them, a basic income could help fight poverty, reward the too-often-invisible work of caretaking, and reduce emissions while expanding time for leisure and creativity.

So, in the spirit of the Leap Manifesto’s “call for a vigorous debate about the introduction of a universal basic annual income,” we decided to organize one.

On April 13, 2017, over 300 people gathered in Toronto for a lively and much-needed discussion on basic income: its promise, its limitations, and its place in progressive social movements. While the speakers’ positions fell on both sides of the debate, what everyone did agree on was that basic income is not a silver bullet solution — but rather a first step towards economic justice.

Which means the debate over is far from over. Now, we need people like you to get together and continue the conversation, to imagine a model of basic income that genuinely redistributes wealth and allows our society to move towards economic and environmental sustainability. And then, to fight for it.

WATCH A RECORDING OF THE EVENT:

Basic Income: A Way Forward for the Left?