Top 5 Reasons the Green New Deal is Workable, Winnable and the Idea We Need Right Now. 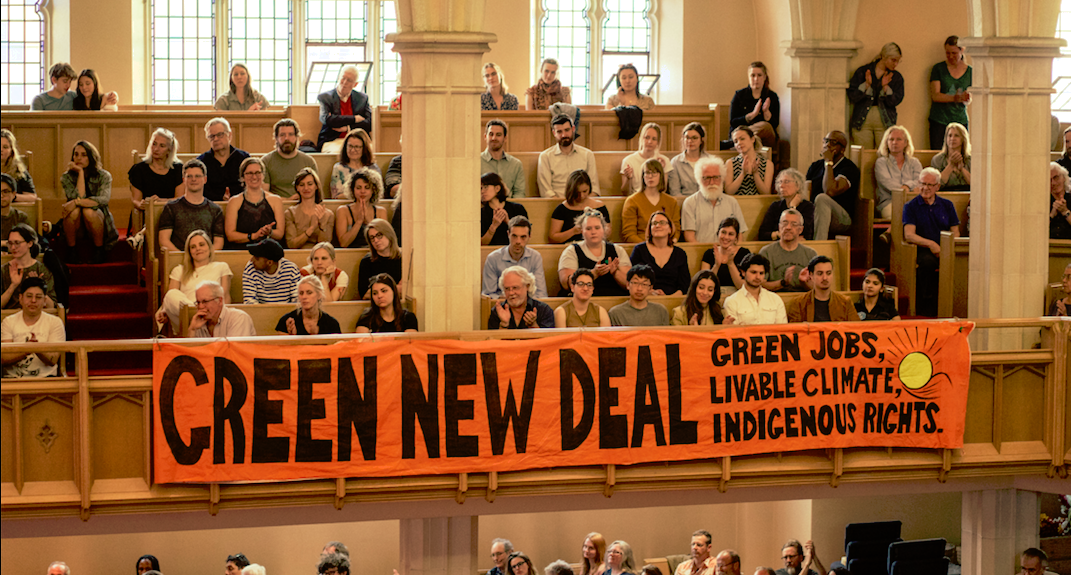 This text is an edited excerpt from a speech given by Avi Lewis on the Leap’s “Green New Deal for All”  tour in June 2019.

1.The Green New Deal Will Be a Massive Job Creator, Swell the Ranks of Unions, and Increase Workers Rights For All, Especially The Most Vulnerable.

We know that investments in renewable energy and efficiency create many more jobs than investments in fossil fuels. 5 times more, per unit of electricity generated, according to one UK study.1 But that only scratches the surface of the transformation required to cut our emissions at least in half in a decade. When you start thinking about the rest of the low-carbon economy: health care, education, local agriculture, land and water defense, and other forms of care work, the job creation potential is far greater.

Imagine the job-creation from the range of programs in a real Green New Deal:

These measures will create more than a million jobs – and even more when we include a federal jobs guarantee with at least a 15 dollar minimum wage, decent benefits, holidays and pensions.

And while we’re embarking on the greatest job creation program in our history, why would we not simply make it a goal to double the unionization rate in Canada, extending collective bargaining rights and protections to those millions of workers?

So, when people tell you that the GND will hurt workers, set them straight – tell them that the Green New Deal is a job program of epic proportions. A tool to fight for working people across this land that will leave no worker behind.

2. Ignoring the Climate Crisis will Bankrupt us — But The Green New Deal is Our Chance to Create a Much Fairer Economy Than We Have Right Now

The economic damages of allowing global temperatures to rise by 2°C would hit $69 trillion globally.2 And we are currently headed for twice that level of warming, at least.

For too long, we have had climate policies that dumped the burden of paying for transition on working people while letting big polluters off the hook entirely. Moving forward, fairness in climate financing must be non-negotiable – and that means the polluters have to pay.

It’s not hard to figure out who we’re talking about here: the “Carbon Majors” – the 100 corporate and state fossil fuel giants responsible for  a whopping 71 percent of total greenhouse gas emissions since 1988. Also, the richest 10 percent of the world’s population, who produce almost half of all global emissions today.

Any climate policies that are going to be backlash-proof have to reflect that reality.  We can increase royalties on extraction. We can slash absurd fossil fuel subsidies. And we can sue for climate damages.

But it’s not just fossil fuel companies that are failing in their obligations to the rest of society.

If Canada’s top 100 corporations just paid their damn taxes at the legislated rate, we’d have an extra 10 Billion dollars in public revenue – each and every year.3

And then there’s an even higher annual amount that Canadian corporations are stashing in tax havens. More than $1.6 trillion dollars left Canada for offshore financial centers last year. If only 10% of that sum was offshored in order to dodge taxes, cracking down would generate $25 Billion a year. That’s a helluva down payment on a Green New Deal, and would begin to tackle inequality head-on. The Green New Deal is our opportunity to address structural inequality and tackle the climate crisis at the same time.

We can afford a Green New Deal, as long as we have the courage to do what so many political parties in this country refuse to do, which is to go where the money is, and get it back.

3.This is our chance to defend life on earth and Indigenous land rights at the same time.

At least a quarter of the land on earth is traditionally owned, managed, used or occupied by Indigenous Peoples.4 And those territories – though under intense pressure from industry – are also significantly better protected than lands under the control of settler societies. Which isn’t at all surprising – Indigenous peoples have been defending their lands for thousands of years.

For this reason, the UN report on Biodiversity states that the “knowledge, innovations, practices, institutions and values” of Indigenous peoples are key to protecting the biodiverse systems on which all life depends.5 In other words, when we defend Indigenous land rights, when we respect Indigenous knowledge, we defend the health of our entire planet.

All of this means that in rising to the climate crisis, we have a chance to redress and make reparations for foundational and ongoing genocide in these lands. Not with more inquiries and more empty apologies but with the return of stolen land.

That begins with the full implementation of the UN Declaration of the Rights of Indigenous People, including the principle of Free, Prior and Informed Consent, as well as the 94 Calls to Action of the Truth and Reconciliation Commission and the recommendations of the National Inquiry into Missing and Murdered Indigenous Women and Girls.

4. It Can Raise an Army of Supporters

Since its launch in the US, the most frequent criticism of the Green New Deal is that its focus on economic and social justice is a liability – making climate action a harder sell than if it was just a plan about reducing emissions.

This assumes that the social and economic justice pieces of the Green New Deal are weighing it down. In fact, they are precisely what is lifting it up.

As the climate justice movement has been arguing for many years now, when the communities with the most to gain from change lead the movement, they fight to win.The “justice” part of “climate justice” isn’t just morally right; it’s a winning strategy. To change everything, we really do need everyone!

5.The Green New Deal will be good for our souls.

In fact, we may never have needed a collective project – a higher purpose – more than we do right now.

It isn’t only the planet’s life support systems that are unravelling. So is our whole social fabric, on so many fronts at once. The rise of fake news. Of fascism and conspiracy. In the mass loneliness and isolation of late capitalism, we are missing shared assumptions about what we can trust – about what is even real.

No surprise then that the biggest obstacle to massive change in the face of climate breakdown is not climate denial. It’s hopelessness. A feeling that it’s all too late, we’ve left it too long, and we’ll never get the job done on such a short timeline.

A common project on the scale of the Green New Deal could help restore a sense of collective purpose.

It’s not a cure for racism or misogyny or homophobia or transphobia – we still have to fight all of those head on. But it would give us a sense that we are working together for something bigger than ourselves, something we are all a part of creating.

It would challenge the endlessly promoted narratives of fear and division with a positive and powerful vision of what humanity can be. This vision is already emerging, coming from the streets, from the schools, from workplaces, and from Unceded Territory. It’s a vision that says that all of us, combined, make up the fabric of society.

And when the future of life is at stake, there is nothing we cannot achieve.

That’s why we will win a Green New Deal. We will win it because we have to. We will lead from below, we will force our so-called leaders to follow, and we will build a safer, fairer future for the many, not the few.