TORONTO – Workers at The Leap, a Canada and US-based organization focused on the intersecting crises of climate change, inequality, and racism, voted unanimously to join Canada’s largest union, the Canadian Union of Public Employees (CUPE).

“We’re very excited that workers at The Leap have made this decision,” says Kristy Davidson, a CUPE representative who is involved in the drive. “CUPE has a long history of advocating for positive change in our communities, and these new members work day in and day out to bring about the kind of societal change that will benefit everyone.”

The workers contacted CUPE earlier this year, and The Leap’s management and co-founders have supported the workers’ decision at every step of the way.

“Today, Naomi Klein, Avi Lewis and I are celebrating the workers’ success in bringing The Leap into the house of labour” said Executive Director Katie McKenna. “I’m looking forward to negotiating a collective agreement, to ensure that workers can contribute with passion, pride and power to our work every day at The Leap.”

“The fight for workers’ rights and workplace democracy is central to climate justice and what The Leap advocates for. CUPE was one of the first unions to publicly support The Leap Manifesto and a Green New Deal, so it was a natural fit,” said James Hutt, Senior Manager of Programming and one of the new CUPE members at The Leap. “By joining CUPE, we both gain rights in our workplace, and can participate in a strong, progressive union to help more workers bargain for the common good.” 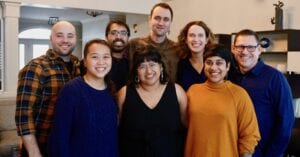