ACTION: What is the Leap Manifesto?

Once in awhile, an action, document, demand or slogan breaks out of the social movement world and becomes common currency in the wider culture. Occupy Wall Street is a great example. This process is mysterious – it’s usually not because the people behind it are uniquely brilliant, or the content is completely new. In fact, these moments usually emerge out of yet one more demo, one more occupation, one more action in the long, gruelling, patient work of movement building. At the moment of the spark, there is rarely any sense that an explosion will follow. 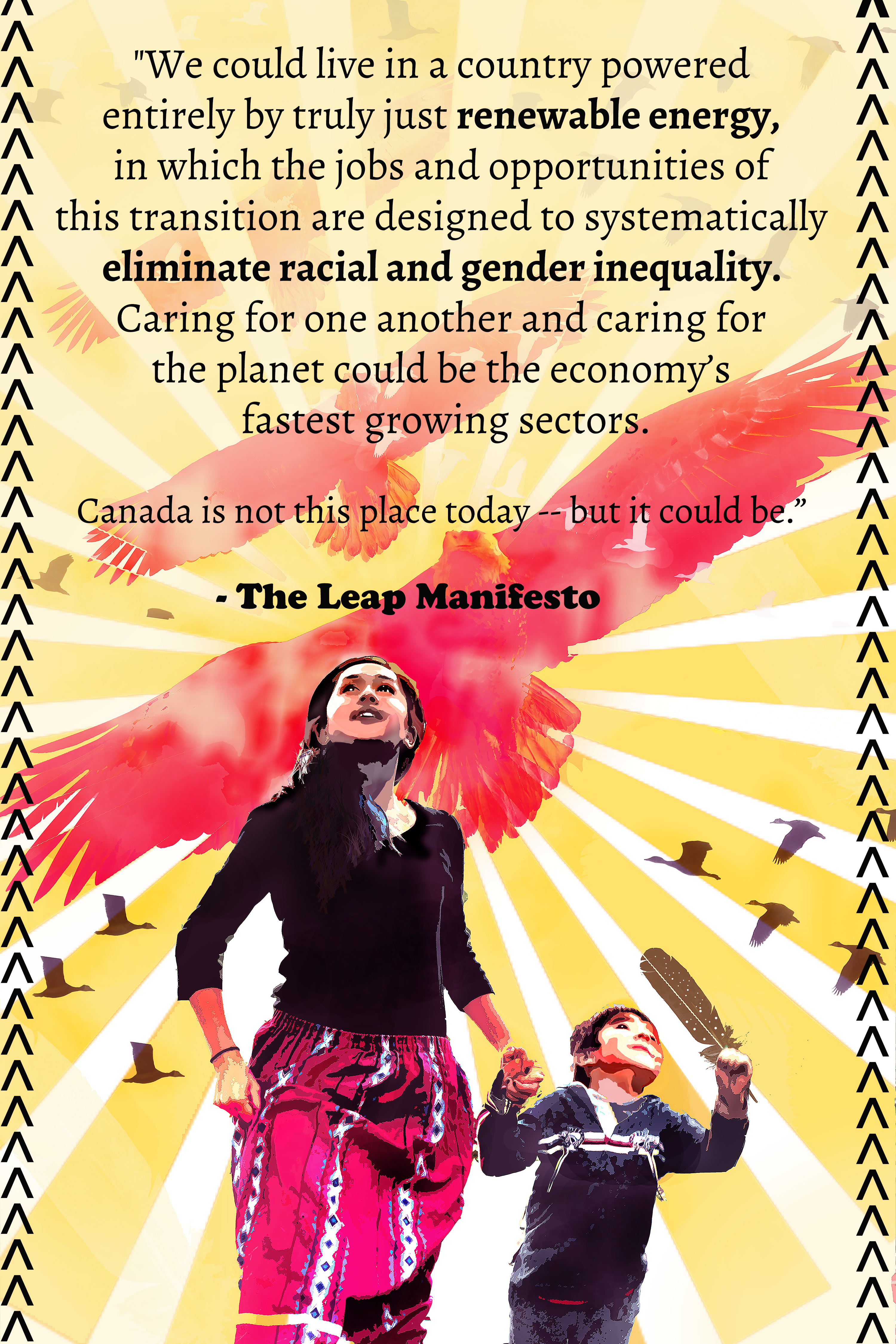 That’s pretty much what happened with the Leap Manifesto in Canada.

It was in the middle of the long federal election 2015, and for people passionate about climate justice, it was enraging: each of the party leaders had chosen a tar sands pipeline to cheer for, and none of them were talking about the climate crisis with anywhere near the urgency and ambition that our historical moment requires. So a bunch of us launched the Leap Manifesto.

The establishment response began immediately, and continued for a surprisingly long time. The Globe and Mail editorial board called it “madness”. Disgraced newspaper baron Conrad Black (yeah, he still has a column…) called it “economic suicide”. The guy who’s allowed to have opinions on our national public TV newscast described it in print as a “a wild-eyed ultra-greenist, anti-capitalist dogma-sheet.” Even former prime minister Brian Mulroney joined in, calling the Leap “a new philosophy of economic nihilism that…must be resisted and defeated.”

And then more than 45,000 people and well over 200 organizations in Canada signed it.

The manifesto itself came out of a convening, in which 60 social movement leaders from across Canada spent two days together, exploring the opportunities for busting out of our issue silos and organizing intersectionally. It was a once-in-a-generation constellation of different causes: Indigenous leaders, trade unions, enviros, food justice, migrant rights, anti-poverty, faith communities and more. It was a roller coaster meeting, with painful truths spoken about the betrayals and ongoing colonialism of too much of the NGO world, and many tensions with the different political currents represented in the big circle. But one of the many things that came out of the meeting was the drafting of the Leap Manifesto, a consensus document in which many people from that meeting played a vigorous role.

The Manifesto is essentially 15 political demands that would get Canada off fossil fuels in a hurry, while systematically attacking the intertwined crises of racism, inequality, and climate change. They are all longstanding calls from the different participating movements, but rather than presenting them as laundry list, the Manifesto is written as a story – one that evokes the kind of world we want and need, one built on an entirely different set of values. And this perhaps is a clue to why the document has resonated the way it has: while we all continue to resist – to say No – to relentless attacks on people and the planet, the Leap Manifesto speaks to our hunger for a coalition of the Yes.