The City with the Giant Heart: Taking the Leap in Thunder Bay

By: Avi Lewis and Jody Chan

“The march was a watershed moment for us. It was the first time that the environmental activist community put forward a positive vision of the better world we were fighting for, instead of just trying to identify a common enemy.”

It’s early Wednesday morning in Thunder Bay. A bitter wind is blowing off Lake Superior  and the day is brutally cold and damp, at least for southern Ontario city-dwellers like the two of us. But Julie is animated as she describes a slushy April afternoon last year, when people came out by the hundreds to march through the streets for climate action. 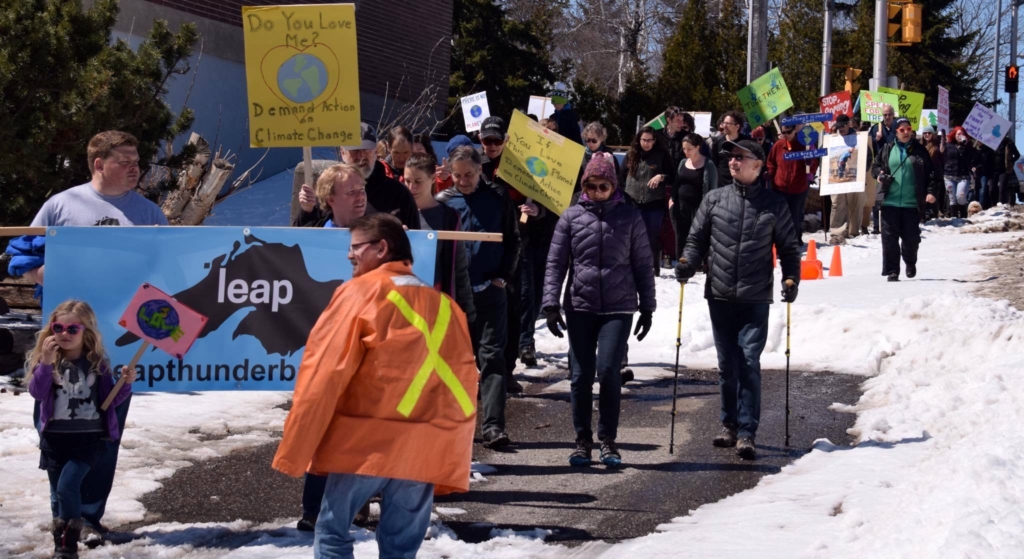 After the march, the crowd lingered for hours. Climate change activists, student organizers, retirees and racialized youth groups — folks who had never met before in this small city of around 100,000 people. Those few hours of solidarity and connection, Julie recalls, felt like an opening, a new possibility.

Around the table, everyone agrees that this turn was a significant one. We’re meeting with a cross section of local environmental activists: members of Citizens United for a Sustainable Planet (CUSP) and Ontario Nature, some leading lights in the anti-pipeline fights, and some longtime veterans of struggles against nuclear waste sites. One table of committed folks, a small fraction of Thunder Bay’s rich community of social and environmental activists.

Julee tells us that since the defeat of the Energy East tar sands pipeline at the beginning of October, it feels like a weight has lifted. Free from the endless procession of deputations, public consultations, and reactive protests, the group is looking for a new campaign to throw themselves into. Something hopeful, proactive, and bold. Something like Leap Thunder Bay.

The two of us are here in the city on an investigative mission. In early 2017, we found out that CUSP and the Lakehead University Student Union’s Sustainability Initiative were co-hosting a community conversation on the Leap Manifesto. The conversation drew a group of people who had long been banging on the doors of City Hall in support of a variety of causes – anti-racism, mental health services, homelessness, environmental struggles and more. Out of the cross-pollination at that meeting, Leap Thunder Bay was born. The group quickly came up with its own localized version of the manifesto, and announced its audacious intention to use this platform to recruit a diverse slate of candidates and take over City Council under a Leap banner in 2018.

As soon as we heard about this small but scrappy crew of grassroots organizers and local residents, we knew something special was happening in Thunder Bay. We fell in love with the story of Leap Thunder Bay, and we’ve been seeding it everywhere we go. But wherever we told this story, we were faced with two questions: can they really win? And if so, how can we do this in our own community?

To find out, we realized, we had to go there. So we made this trip to meet folks like Dave Cryderman and Courtney Strutt — two of the core organizers tending to Leap Thunder Bay’s fledgling dreams — and to feel, firsthand, Thunder Bay’s deep hunger for change.

A Tale of Two Cities 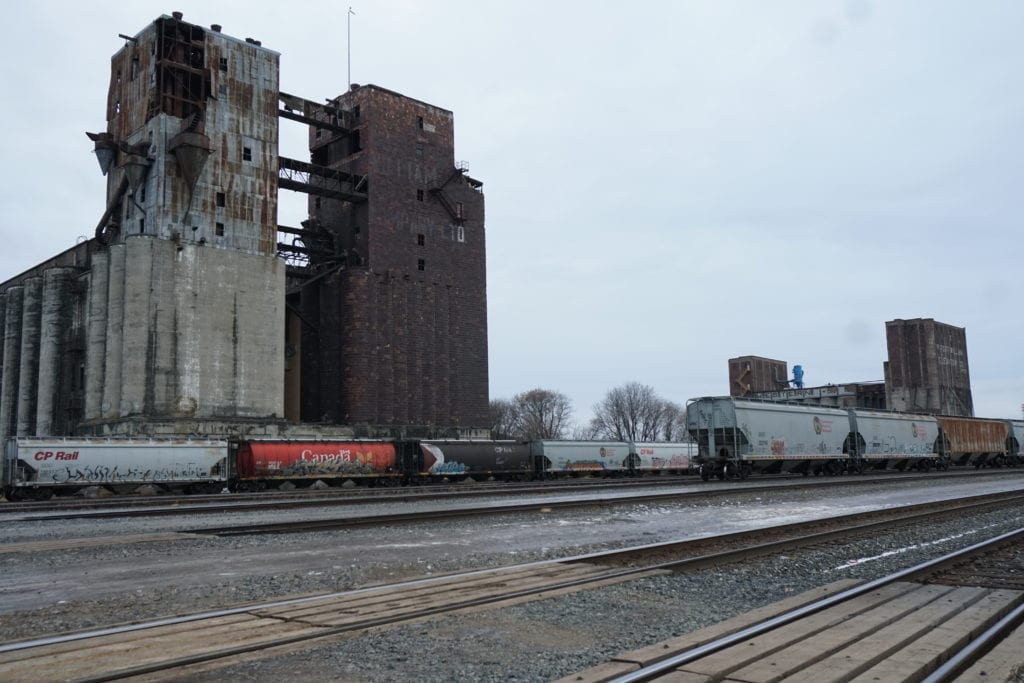 The city of Thunder Bay sprang into existence in 1970, an amalgamation of the two port towns of Fort William and Port Arthur. The city was born in the boom years of resource extraction — and for the next two decades, it thrived on feeding spruce trees into saw, pulp, and paper mills, and unloading grain brought by rail into storage elevators and onto ships. As late as 1988, the forestry and transportation sectors employed roughly 1 out of 5 of Thunder Bay workers.

But since then, like in so many other northern communities, the bust has bit down hard. According to snapshots from census data, over the past twenty years, the city has lost about half its manufacturing jobs. Homelessness is a major crisis; there are hundreds of homeless people on the streets of Thunder Bay, with almost 75% of them identifying as Indigenous. Almost a thousand languish on the waitlist for affordable housing.

Most recently, Thunder Bay has been in the news as the site of virulent racism  — a city whose name has come to evoke violent hate crimes against Indigenous people, police discrimination in jails, and a mayor and police chief embroiled in legal scandals  while the city faces multiple, intersecting crises.

“An explicitly anti-Indigenous candidate got 10,000 votes in the last municipal election. It’s going to be worse in 2018; those people are more organized now,” says Dave, as we drive by a site on the McIntyre River where the bodies of three Indigenous youth were found. Tellingly, in the fall of 2017, when Senator Lynn Beyak defended the “good deeds” of “well-intentioned” religious teachers in residential schools, Thunder Bay’s City Council debated a motion calling for her resignation – and it failed to pass.

Another problem with City Council, Courtney adds, is the annual salary for city councillors: at just $27,000, municipal politics is an arena reserved for those who have financial security from some other source.

On the Forefront of Change

Thunder Bay is, in many ways, a city of rifts: between Port Arthur and Fort William, Indigenous and non-Indigenous, rich and poor, between those the city seems to value and those it seems unable to even see.

At a public event where the two of us are speaking, retired nurse Anne Cryderman comments, “The problem is that Canada has an aging population — in Thunder Bay we’re mostly seniors here. And we feel unworthy.” Nods around the room. “We’re not valued in society and we’ve started to believe it — we don’t feel we deserve better. We don’t think we’re worthy.” 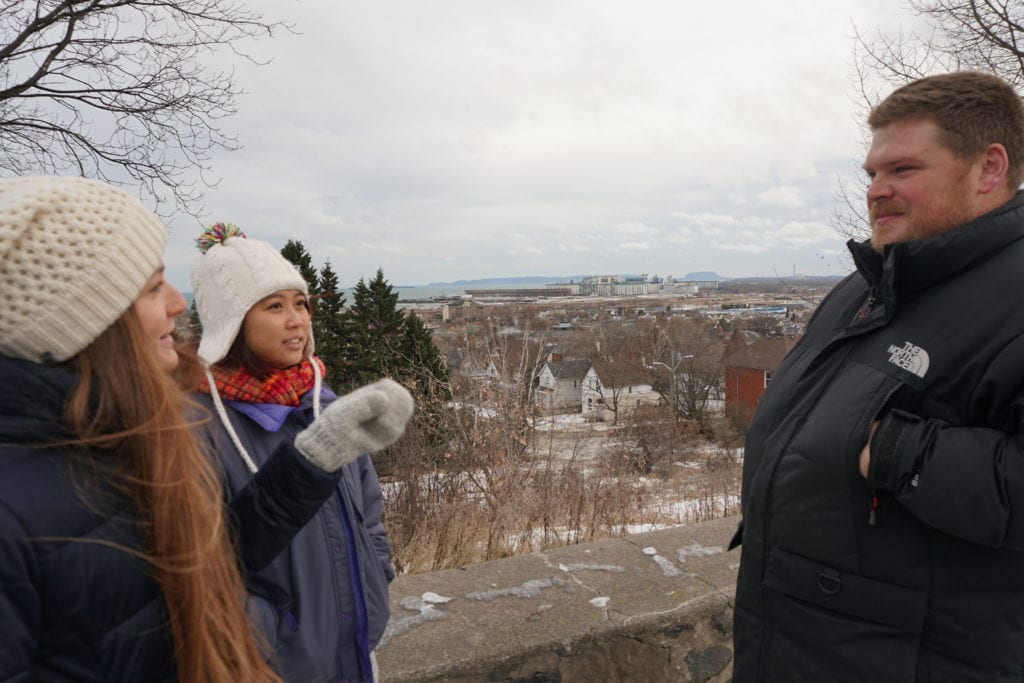 We don’t have any easy responses. To us, it’s clear that the social and economic challenges faced by Thunder Bay have been in the making for decades. From the vantage point of Hillcrest Park, the city landscape is dotted with abandoned grain elevators and old railroad tracks. Is the future just to wait and hope for the next resource boom? The next chance to rip value out of the earth and ship it south? Or is there another future to be built? One based on caring for the earth and for each other? Thunder Bay is clearly a city of fighters, a city fiercely beloved by its people — its motto used to be, “the city with a giant heart.” If a caregiving economy can take root anywhere, it’s here.

A Place for Care

In the Thunder Bay Leap Manifesto, a vision emerges of a city that centres and upholds Indigenous treaty rights and title to land; returns good jobs to the city by becoming a hub for manufacturing in the renewable economy; ends homelessness; and improves quality of life for everyone. It’s a powerful vision that seeks to elect a strong, unified team of city councillors in the 2018 municipal elections, and to build a city-wide network of groups and individuals that can continue to exert political power and respond to the changing needs of Thunder Bay’s communities.

Perhaps most importantly, members of Leap Thunder Bay believe that they can win. The group’s momentum rides on a wave of radical municipal movements around the world, as well as strategic opportunities in Thunder Bay. The 2018 municipal elections will be the first time that online voting is an option, bringing in a new block of potential voters. Environmental activists and Thunder Bay city staff are also continuing to advocate for the implementation of the EarthCare 2014-2020 Sustainability Plan, a proposal for how the city can adapt to the effects of climate change. Leap Thunder Bay is taking this further, adding an all-in vision for social justice as part of the transition to a resilient, future-facing economy.

Part of the appeal of municipal organizing is its potential to place decision-making power back in the hands of the community, through political education and grassroots mobilization. Neighbourhood by neighbourhood, people care because they can imagine what it would look like to win in the places they know best.

Courtney understands this well; she originally moved to Thunder Bay for work, but fell in love with the city and has invested much of her time and energy into making it a better, safer place to live. “So much of what’s happening in the world creates apathy,” she tells us. “Where you need to start is places that you care about, that you would fight for. That’s why I ended up coming home to Thunder Bay.”

We spend only three days in Thunder Bay, but driving on unpaved gravel roads with Dave and Courtney, in the shadow of abandoned grain elevators and with the occasional deer running across our path, we feel it too. Caring for the earth and each other feels more real, and more possible, in this place where nature and urban life are so intertwined.

On our last night in Thunder Bay, we join hundreds of people in Port Arthur’s Polish Hall (best known for its top-notch pierogies) for the New Constellations show, a country-wide tour of Indigenous artists and some of Canada’s most well-known musicians and writers, including Feist, Lido Pimienta, and Naomi Klein. 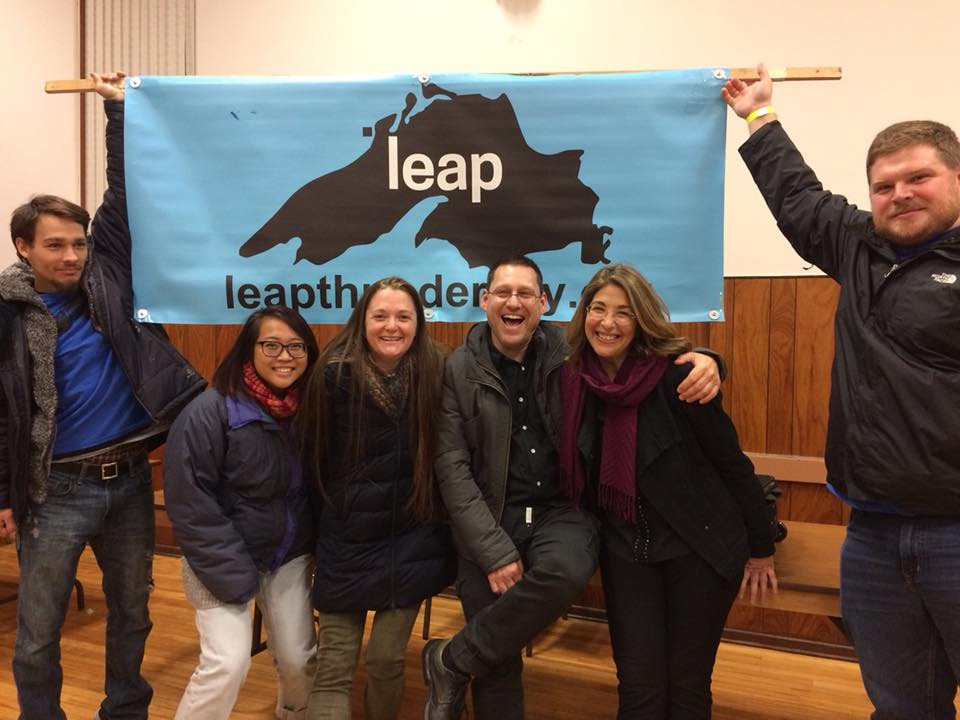 One of the first performers of the evening is Jana-Rae Yerxa, a poet and academic local to Thunder Bay. She is reading a poem about Barbara Kentner, the Indigenous woman who was killed by a trailer hitch thrown from a passing car in January 2017. We hold our breath through the whole thing; this process of publicly surfacing ongoing colonial trauma is new territory for this city. How will Thunder Bay respond?

As the poem comes to an end, there is a brief, heart-punching pause. Then, a standing ovation.

After Jana-Rae, more Indigenous artists take the stage one after another, performing together, creating together, each performance as mesmerizing as the last. We almost don’t notice until the end, blinded as we are by the show’s brilliance, but over the course of one evening, their words and their music have done more than carve out space for Indigenous presence and Indigenous resurgence. They have blasted open every one of our assumptions about Thunder Bay and the changes this community is ready for. And in the wings of the old world, its colonial history exposed for what it is, the light of another world is already starting to push through the cracks.