Leaping with the Angels, Leaping for the People

Leaping with the Angels, Leaping for the People

Last weekend, nearly 80 local leaders gathered at Debs Park in Los Angeles, to begin framing a justice-based vision of how the second largest city in the United States can go fossil fuel free by 2025. We brought together a spectrum of organizers from the frontlines of Indigenous rights, environmental justice, labor and food justice, and more. Over two days, we commenced a collective process of defining the Los Angeles we want and know is possible.

While on my flight to Los Angeles from Miami, the passenger seated next to me noticed my pile of reading: The Fire Next Time by James Baldwin; Urban Alchemy by Dr. Mindy Fullilove; a report highlighting the homeless crisis in Los Angeles; and a paper on decarbonizing the city by our friends at The Climate Mobilization. She tapped me gently on the shoulder and asked, “Are you flying out to be a contestant on Jeopardy or something?” To which I quickly replied, “In a way, yes, actually.” Because that’s what it felt like.

For communities next door to fracking operations, or Black and Brown children living near freeways with higher rates of asthma than their white counterparts, a lot was riding on the success of the convening. Climate change, and all the injustices that are exacerbated by it—systemic racism, the genocide of Indigenous people, massive income inequality—put Los Angeles (and the entire planet) in jeopardy. In thinking about all of this, I was brought back to what sparked the convening in the first place.

From a Cup of Coffee to Wartime-Level Mobilization

On a hazy and overcast Saturday morning in early May, my colleague Rajiv Sicora and I ventured out into the streets of Toronto. We were taking a scenic route across town to meet with Andy Schrader, who serves as Los Angeles Councilmember Paul Koretz’s Director of Environmental Affairs. Andy happened to be in Toronto on a family trip; he was working with Climate Mobilization on an emergency decarbonization plan for Los Angeles, and wanted to discuss what the spirit of the Leap Manifesto might bring to the effort.

Raj and I emphasized that in Canada, the Leap Manifesto was an attempt to seize the political moment—plummeting oil prices, an upcoming federal election—to tackle multiple crises at once. We argued that radical climate policy is not only an opportunity to reduce emissions, but to also increase justice in Los Angeles and far beyond.

Shortly after our meeting with Andy, Councilmember Koretz scheduled a big announcement at Los Angeles’s City Hall. It was there, on a sunny day in June, that Naomi Klein and I joined local leaders who have been working for years to bring about systemic change in their city. At the press conference, we officially launched a working group for a “wartime-level climate mobilization, consistent with the tenets of the Leap Manifesto.” As Koretz explained, “When I read the Leap Manifesto, I knew right away that this is the type of plan we need in Los Angeles. It embodies the urgency this crisis requires, it has justice at its core, and it has the power to inspire.”

What came next was a blur, and an immense leap of faith. 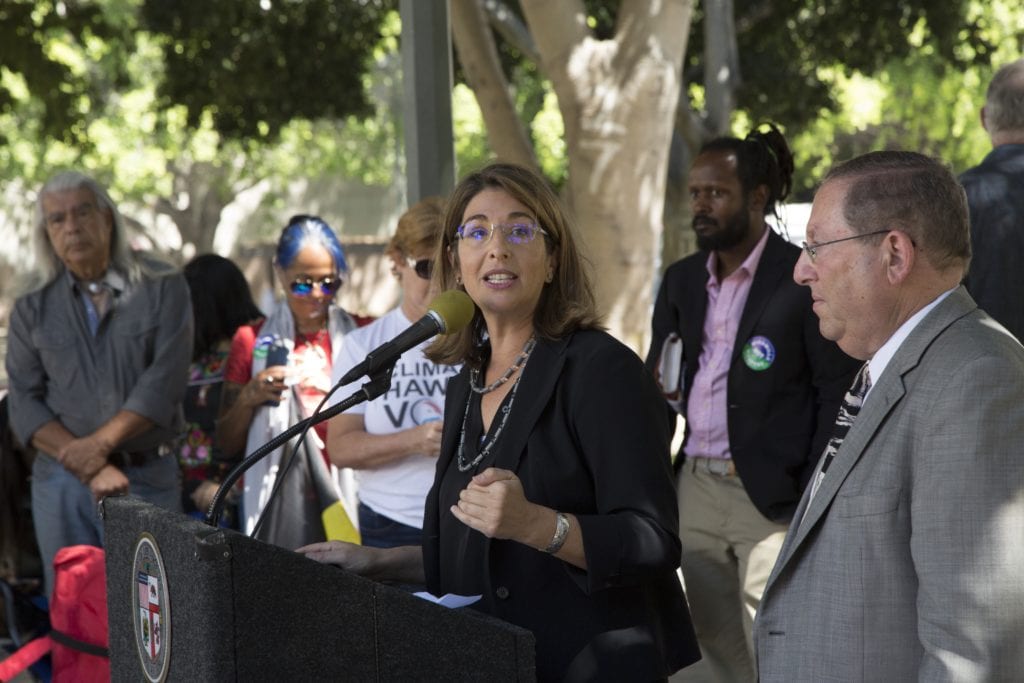 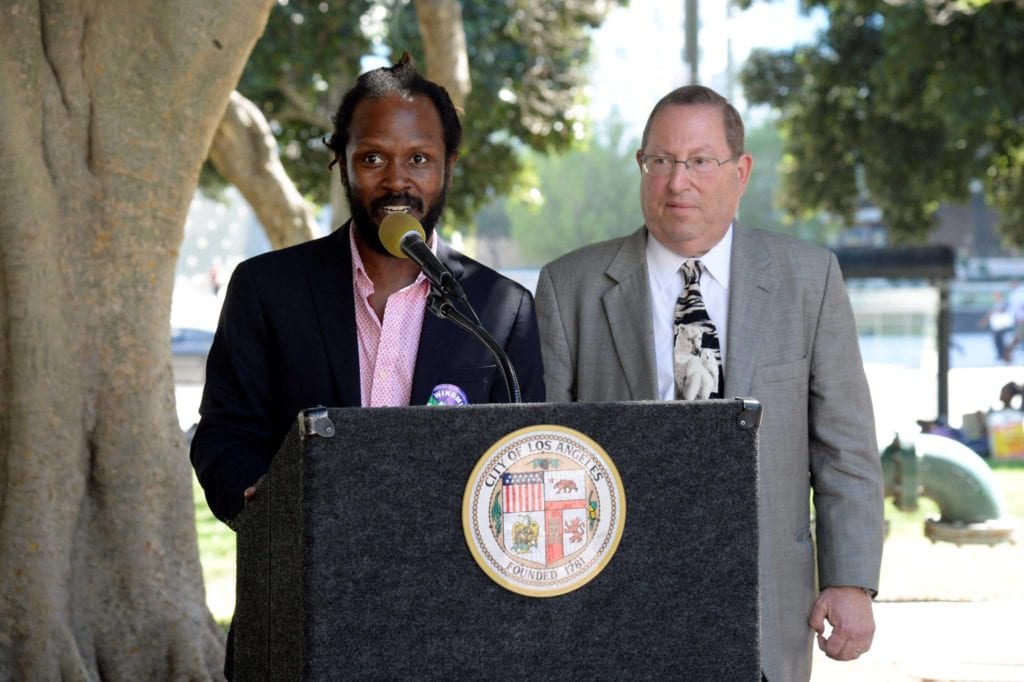 A Process, Not an Event

For those of us on the planning committee, the days leading up to the weekend were a mix of skepticism, stress and flat-out fear. This was the first time that a process modeled on Canada’s Leap Manifesto would be attempted in the U.S.

The 1995 movie Canadian Bacon, which satirizes U.S.-Canada relations, has to be one of the worst moments in cinematic history. That said, there’s a quote from one of the characters, named “Boomer,” that resonated with me on the morning of the convening: “There’s a time to think, and a time to act. And this, gentlemen, is no time to think.” I thought of the film because there we were, about to bring a Canadian idea to the U.S.—and there are so many examples of this process not working out. Look what happened when Canada imported hip-hop: we ended up with Snow’s “Informer.” What if the same thing happened this weekend?

I felt the same anxious question being asked, in one way or another, by each attendee as they began to trickle in: could we pull this off? With so much at stake for so many, taking on all of Los Angeles’ crises at once felt like a dangerous, exhilarating gamble.

But once we settled down, we were grounded by a beautiful territorial blessing offered by an elder from the Tongva people, who originally inhabited the Los Angeles area. It became clear that we had succeeded in assembling a remarkably broad coalition, and that folks were ready to dig deep.

This was a major victory in itself, and a testament to the shared concern that Angelenos have for their local communities and for the city as a whole. The co-facilitators of the convening, Rev. Eddie Anderson and Clare Fox, each offered some words to invite us into a collective process with the potential to change Los Angeles and perhaps even the world. Rev. Eddie asked us “to be aware of what is joyful, challenging, and crying inside of you. Bring it so that you may offer your whole self to the sacred space we have created.” Clare added,  “We are here to hold space with each other — this is a process, not an event.” 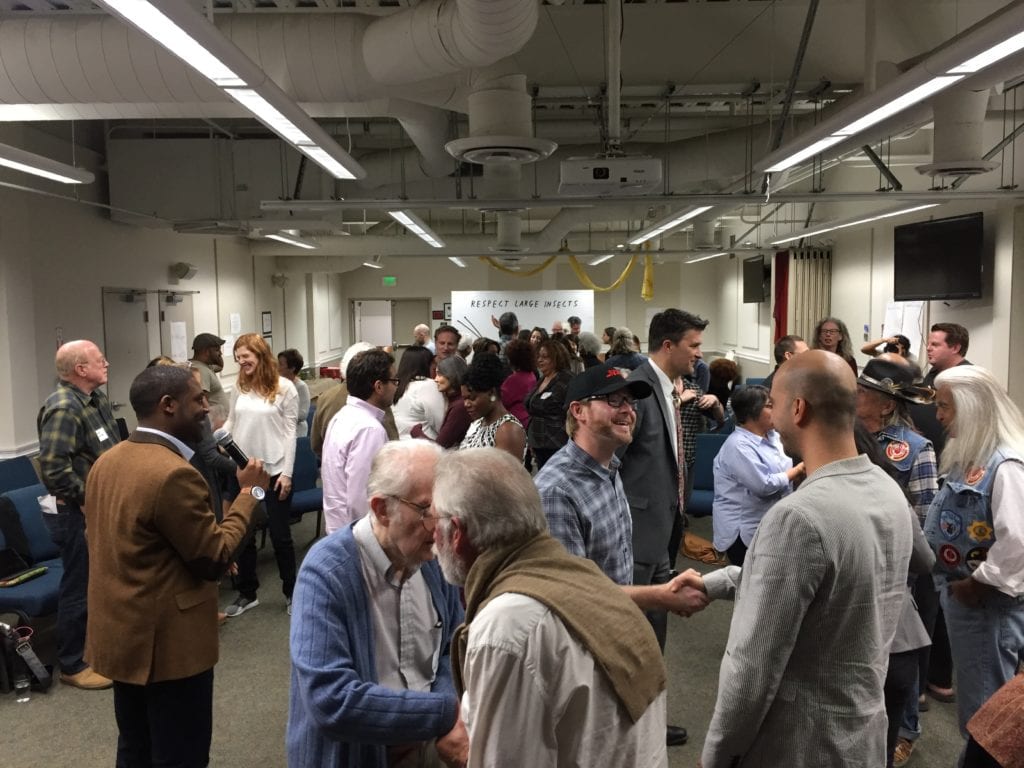 To Envision The Yes, Face the No

On the way to the convening, thanks to LA traffic, I was able to review some of the many crises that form the city’s cycle of “no” we’ve been fighting against—from a homeless rate that jumped 23% from 2016 to 2017, to mass incarceration that primarily targets Black and Brown people, to over 15 million metric tons of carbon dioxide emitted from the city annually.

During his poignant and powerful opening remarks, Councilmember Koretz went right to the heart of the need to come to terms with this cycle of “no”: “I want us as Angelenos to come clean right now. We have powered ourselves with coal extracted from lands of the Navajo nation. Our energy use has destroyed their water table, their way of life. Navajo jobs are being lost, and these jobs are necessary to sustain the lives of extended families on the reservation. Our extractive economy has failed humanity.”

“LA was built on oil, it was built on inequality. We have an opportunity to create a new economy right now,” added Martha Dina Argüello, Executive Director of Physicians for Social Responsibility-LA.

As these statements remind us, it was not small steps that got us here. And because this is true, small steps will not deliver us to where we need to go.

“‘Nothing else will do.’ These words help frame what we are doing together,” remarked Rev. Eddie. It’s true: from a policy standpoint, incrementalism is not going to get us to the world we want in the little time we have left. Nothing less than a bold leap away from fossil fuels will address all the urgent and intersecting issues that we face. And it’s not only in the policy realm that we must embrace this truth, but also in the processes that we use to organize together. To me, that’s what the weekend was about.

Rev. Eddie’s remarks were taken from an inspiring poem that he and Clare composed, using only the words of attendees (on why they were attending the convening). Here’s an excerpt from the poem:

Now is the time for justice

We cannot afford to fail

Connected through a reimagined society

We have to remove the veil

Healing, rooted in our intuition

Inspired by our fear of gambling on the right thing

Curious by the earth child’s conjuring

We are motivated to find the path beyond limitation

Over the course of two days together, we allowed ourselves to have difficult discussions about the role that racism, classism, and hetero-patriarchy play within our movement spaces. We discussed what the term “just transition” means and what it should encompass. We listed preliminary demands that ranged from a just transition for bodies returning from the prison industrial complex, which includes immediate restoration of their voting rights, to developing a framework for financial reparations to Indigenous people and the descendants of African slaves.

We heard the powerful poems of local writer Olga Garcia; took part in a communal laughing yoga session; and heard stories from Chef E-Double, who prepared our food all weekend, about why he set out to address racial justice through cooking and bringing healthy food to people living in food deserts. As a group, we knew we needed to live in this process, and to take in the idea of building transformational relationships between our movements—rather than purely transactional ones, where we’re trying to get things from each other from our separate silos. We need to build much more common ground together. Here’s how scholar Kimberlé Crenshaw, who coined the phrase “intersectionality,” puts it: “A key aspect of intersectionality lies in its reco