Leap Victoria Joins the Movement to Decolonize BC

Leap Victoria Joins the Movement to Decolonize BC

In June, Victoria, BC’s veteran local Leap group celebrated its one-year anniversary. Located in Lekwungen territory on Vancouver Island off the province’s west coast, it’s the westernmost Leap chapter in Canada. British Columbia provides a unique context with most of its land being unceded First Nations territory, putting decolonization at the centre of Leap Victoria’s agenda.

Founded by a diverse mix of students and long-time organizers from labour, the NDP, and other social movements, Leap Victoria launched with a series of educational events and panel discussions, connecting the Leap Manifesto to foreign policy and exploring the links between militarism and the climate crisis. The group was part of the coalition behind this May’s four-day Walk for the Salish Sea to challenge Kinder Morgan’s Trans-Mountain pipeline, and members also helped elect BC’s new NDP-Green working majority government. Now, they’re supporting a Leap-allied candidate in an upcoming municipal race. On these projects and others, Leap Victoria works alongside a range of local groups such as the Social Environmental Alliance, the Indigenous Solidarity Working Group, and the Vancouver Island Peace and Disarmament Network.

I spoke with PhD student and Leap Victoria organizer Keith Cherry about the group’s first year, and what they’re planning next.

Justin Fisher: Why did your group decide to organize around the Leap?

Keith Cherry: I think we were interested in doing something positive. The left is very good at critique these days, and we can all see the flaws in the status quo and we’re very practiced at opposing them—inequality, ecological damage, violence, colonialism, patriarchy. But it’s easy to get caught up in that opposition and to forget to offer people a vision of something better. That’s what really attracted us to the Leap—the opportunity to propose something positive. We wanted to to start building a better society.

JF: That really resonates with me. There’s certainly a lot to react to, but it’s a crucial idea to try and get out in front of things.

KC: Exactly, especially in the current political climate. Right now, I think we’re seeing a real change. I don’t think you really have the left versus the right anymore so much as the left and the right against the centre. People are tired of the status quo and searching for alternatives. I think the radical right is doing so well right now because they’re good at looking like they’re offering something bold and different, and people are really attracted to that. I think we on the left need to do that too—we need to offer a vision that goes beyond business as usual.

JF: Give me a little background about what Leap Victoria has worked on.

KC: When we first started we wanted to let people know who we are and what the Leap Manifesto is, so we hosted some educational events like public discussions and readings, and then launched the campus group to expand our reach. But once we sort of had our feet underneath us, a lot of us got involved with the provincial election here in British Columbia, and right now many of us are working with a pro-Leap candidate in a local municipal by-election.

Recently we worked with a number of partner groups to organize the Walk for the Salish Sea, which is probably our biggest achievement to date. Along with our partners we organized a 4 day, 80 kilometre walk from Victoria to Burnaby to oppose the expansion of the Kinder Morgan Trans-Mountain pipeline, which doesn’t have the consent of First Nations or local communities.

So we started out with an educational approach and moved into more political and direct action as we became organized. We still perform an educational function, but we also play a political role and take to the streets too. 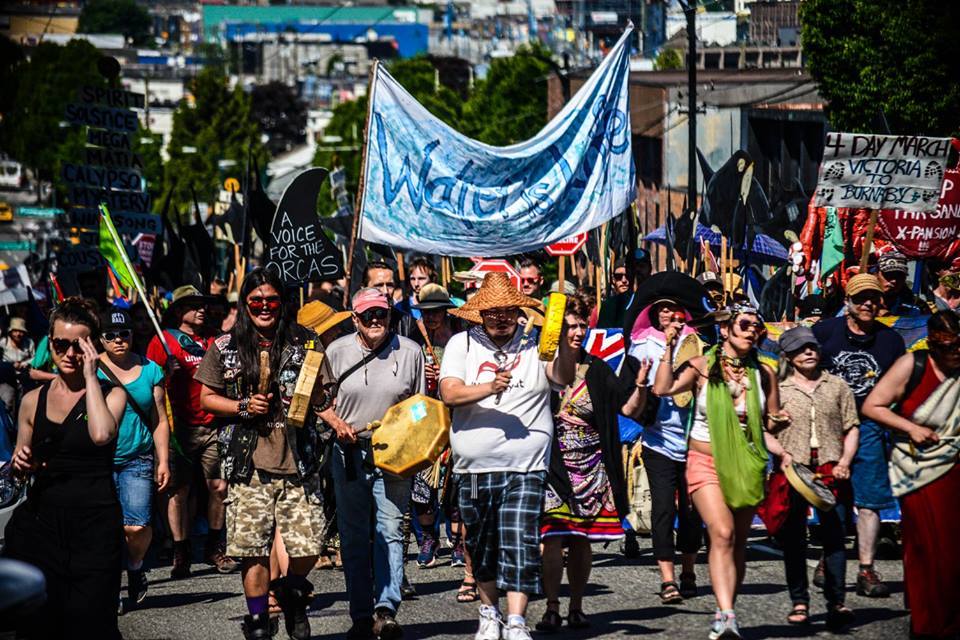 The Walk for the Salish Sea coalition on the march.

JF: You put decolonization at the centre of your platform—why is this important and what does it look like?

KC: I can speak only for myself as there are a lot of different and respectful opinions out there. But for me decolonization is central because no community can be just when its foundations are theft and cultural genocide. These things shape our society, and they connect to so many other forms of oppression and dispossession. So I don’t see how we can address any of the injustices of our society without being attentive to these foundations.

When we envision the sort of future we want to build, I think we all imagine communities that are based on consent and genuine self-government. That means all our struggles have to proceed from a decolonial perspective. So I don’t think you can really have a radical environmental or social justice organization without decolonization at its centre. This is crucial to so many of the world’s problems, from inequality to climate change, corruption, and war. If we want a better form of community, we need to start from a firm moral foundation.

In Victoria, the activist culture is very aware of the Indigenous struggle and there is a lot of will to be part of the solution here.

JF: Why do you think it is that Victoria is quite attuned to this struggle?

KC: That’s a good question. It might have to do with the relatively late arrival of settlers and the lack of treaties in BC more generally. Legal right to the land is still very much in question here, so it flares up often. We also have a provincial economy based on ongoing resource extraction of Indigenous lands, so it’s big business here.

Most importantly, Indigenous communities in BC have shown tremendous leadership putting their issues on the agenda and showing how their struggles intersect with those of other movements.

JF: Why was it important for you to help organize the Walk for the Salish Sea, and what was the experience like? 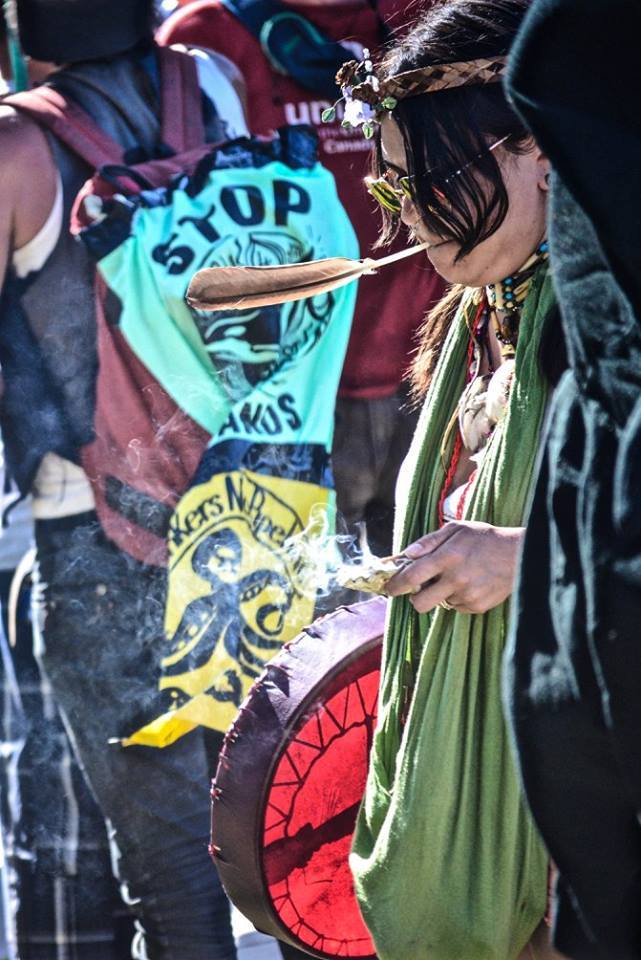 KC: It was a really interesting exercise in community building. From the organizing group, which started meeting 7 months before the walk to sort out all the logistical details, to the walkers themselves and the communities we moved through, the level of commitment and passion for social and environmental justice was absolutely inspiring.

We were working with a huge variety of groups representing the social and environmental justice communities in the area—faith groups, grassroots organizers, big NGOs, First Nations, and so on.

We were led by hereditary Chief Gordon August and his sons, who shared many precious teachings along the way. The support we received from the communities we walked through was overwhelming. It really left me with a sense of hope. Almost 100 of us walked the entire distance, about twice what we expected, and so many others joined us along the way. It was an inspiring experience; the people on this coast are really unified and they’re ready to take action.

I think we felt it was important to organize a walk of this length and difficulty to send a message to government and investors that the people and First Nations of BC are ready to put our bodies on the line, to make sacrifices and do difficult things to oppose reckless resource projects like this from being imposed on communities without their consent. So we wanted to dramatize that and put our money where our mouths were, so to speak. 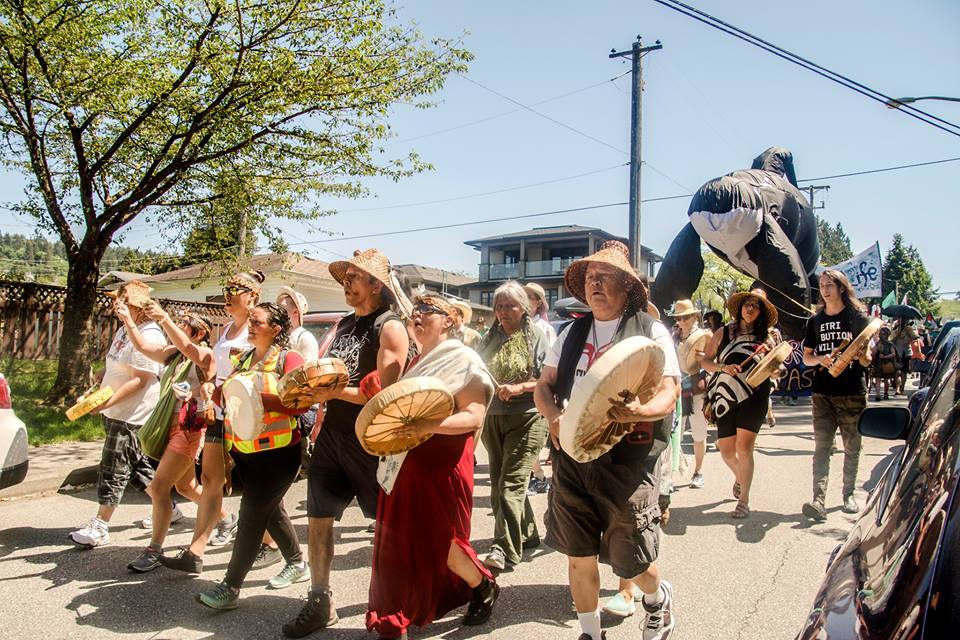 JF: I think that’s in a sense an embodiment of what the Leap is all about, to see so many groups come together to organize something like the walk, so that’s very inspiring to see. Now, BC just had a nail-biter of an election that has brought about a NDP-Green working majority. You mentioned that Leap Victoria was engaged in the election—what did that look like?

KC: Well the backbone of any political campaign is knocking on doors, and we were out there trying to make sure we got pro-Leap local candidates selected. We were non-partisan, working with some Green and some NDP candidates to try and get the most ecologically and socially progressive candidates elected. We have a strong progressive electorate here and we elected all NDP and Green MPs on this part of Vancouver island.

JF: And so what do you think the result means for the province and for Leap Victoria?

KC: I’m thrilled to see a more progressive government take power, but for me, the role of activists remains much the same as it always does. No matter how good or terrible they are, we have to hold our leaders accountable. We have to lead by example to enact a better world when governments can’t or won’t, and we need to show grassroots leadership by building communities that are engaged and inclusive. The context in BC is better now, but our role is the same—we need to continue resisting capitalism and colonialism, racism and patriarchy, and proposing and experimenting with new, democratic, participatory, and ecologically grounded alternatives. I think real leadership always comes from the bottom up—governments can be allies, but the grassroots are the backbone of a progressive society. So for me the struggle continues.

JF: You mentioned that you’re working with a pro-Leap candi