ACTION: Building Solar-Powered Homes in the Path of Kinder Morgan

It’s a season of hurricanes, floods and fires. And it’s hard not to feel like this planet, our home, is spinning out of control. The earth is screaming at us to get off of fossil fuels.  And our government is marching in the exact opposite direction.

This month, construction is set to begin on the Liberal-approved Kinder Morgan pipeline. The Liberals are pushing ahead despite massive opposition, minimal economic benefits—and every evidence it’ll be a disaster for the planet [1,2,3].

It’s enough to make you scream—and then get to work.

At The Leap, we believe that the most powerful NO is a radically hopeful YES. That’s why we’ve been so inspired by the leadership of the Secwepemc nation, whose unceded land lies in the path of the Kinder Morgan pipeline.

The Secwepemc are resisting the Kinder Morgan pipeline by constructing ten solar-powered tiny houses in its path. The houses aren’t symbols—they’re using them to live, host language camps and practice traditional tattooing [4].

That’s right. The Tiny House Warriors are advancing Indigenous rights, sustainable housing, and their culture—while protecting the land and water for all of us [5]. 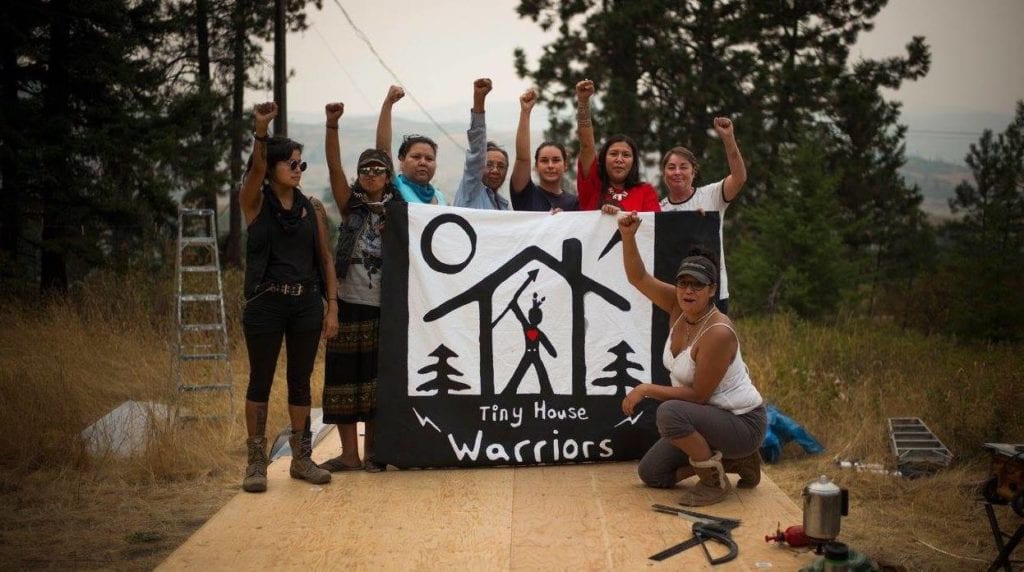 Earlier this month, Naomi Klein published a new piece in The Intercept called “Season of Smoke” [6]. It combines a personal view of B.C. summer wildfires with stories from the front lines of climate chaos across North America.

It’s a moving and frankly scary piece, a reminder of how fast our planet is changing, and how normal the destruction is becoming. “It seems we can get used to almost anything, even the steady annihilation of our own habitat,” writes Naomi. She concludes:

“Our collective house is on fire, with every alarm going off simultaneously, clanging desperately for our attention. Will we keep stumbling and wheezing through the low light, acting as if the emergency is not already upon us? Or will the warnings be enough to force many more of us to listen? To respond like the Secwepemc, who, in a cloud of smoke, are nonetheless putting their bodies on the line to stop an oil pipeline from being built on their fire-scarred land?”

Want to keep up with updates on the Tiny House Warriors? Here’s how:

Thank you to the Secwepemc​ Tiny House Warriors for their labour and their leadership. And remember: this fight is not over. The most powerful industry in the world is not going to let go of this pipeline without a fight. So stay vigilant, keep up with the campaign and stay ready to stand with the Secwepemc​ and others who are putting their bodies on the line to stop the pipeline.​